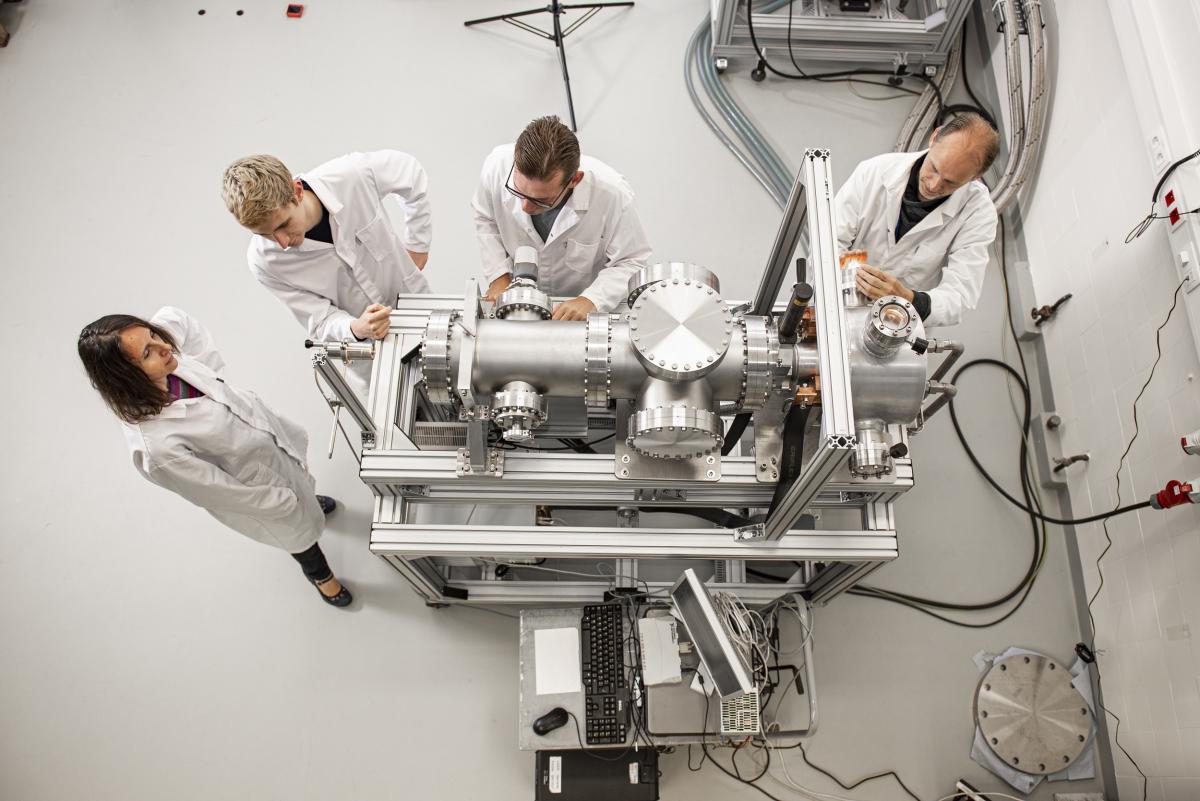 Engineers at SCK CEN have built ISOL@ MYRRHA’s target container – a type of oven that can reach 2400°C. In this “oven”, SCK CEN will produce radioisotopes for medical applications and basic research from 2027 onwards. The research centre has already successfully completed its first integrity test. “The temperature gauge functioned well – it was an incredible feeling,” said Lucia Popescu, one of the driving forces behind the project.

In 2019, when nuclear physicist Lucia Popescu and her fellow engineers, after long preparations, connected the ISOL@MYRRHA target container to the energy supply, it immediately turned orange-red. The oven – with a diameter of only 4 cm – easily reached a temperature in excess of 2000°C. “We were all looking forward to this moment. The fact that it managed to reach the target temperature without any problems is an incredible feeling,” says Popescu.

What is the target container for? According to Popescu, “SCK CEN is currently working intensively on building MYRRHA, the world’s first particle accelerator-driven research reactor. The construction of MYRRHA will consist of several phases. During phase 1, we will build MINERVA, the particle accelerator that can reach an energy level of 100 mega-electron volts (MeV). In a subsequent phase, we will increase the energy level to 600 MeV. This energy is needed to complete all the planned tasks in the MYRRHA research reactor, especially the transmutation demonstration. The research reactor itself will be built in the third and final phase, which will take until 2036.”

The proton beam is diverted at an energy level of 100 MeV. Five percent is sent to an ISOL installation (Isotope Separation On-Line) at the Proton Target Facility (PTF). This 5% shoots through the target discs in the ISOL@MYRRHA target container. “The targets are approximately the same size as a coin, barely 1 millimetre thick and made from a porous material,” explains Popescu. “Due to the energy deposited by the proton beam, the temperature in the target container rises to approx. 2000°C. This enables the radioisotopes to evaporate from the targets. The magic therefore happens at the heart of the PTF. This enables us to begin developing theranostic radioisotopes – radioisotopes which are intended for therapeutic treatment or diagnostic research. The target container itself is located in a water-cooled vacuum chamber.

Once the radioisotopes have escaped from the disks, they start to wander. They collide with everything until they find a small opening in the target container. Popescu: “This is the so-called transfer tube, which transfers the isotopes to an ioniser. Then they are accelerated in an electric field and then separated by a magnetic field based on mass. The latter is very important. For example, a substance such as actinium-225 has a half-life of 10 days, while actinium-227 has a half-life of over 20 years. It is therefore crucial to select the right mass. The isotopes are collected at the end of their journey.” 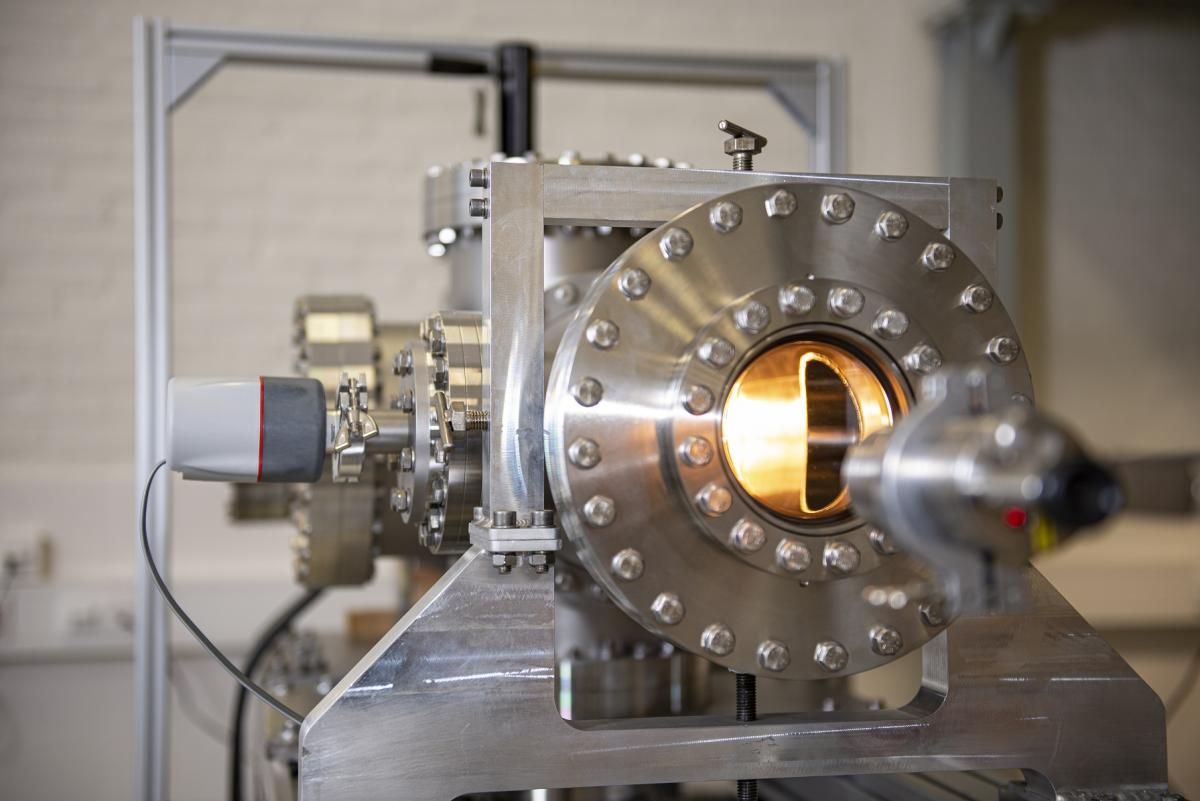 First of all, the isotopes must be able to reach the transfer tube. A uniform temperature profile plays a decisive role in this respect. “Some radioisotopes are anything but volatile and need a temperature of 2000°C in order to evaporate,” explains Lucia Popescu. “If the target container wall is colder in any place and a radioisotope collides with it, it may attach itself to the wall. This would cause us to lose many radioisotopes. That of course is not the intention. That is why we strive to obtain a uniform temperature profile.”

The proton beam heats the targets by depositing energy. Subsequently, the target discs radiate heat onto the target container. By placing the disks at a specific distance from each other, we can guarantee a uniform temperature profile. If the particle accelerator is switched off or the proton beam is interrupted, we maintain the temperature by using an electrical current. Thus, the target container serves as an “oven” that vaporises radioisotopes. It is this last method of heating that we have tested in our oven, which was manufactured in house.”

SCK CEN and the Canadian research institute TRIUMF are joining forces. The two partners have agreed to share multi-disciplinary expertise and infrastructures. They immediately put their words into action, as TRIUMF has shared the ARIEL design with SCK CEN. ARIEL stands for Advanced Rare Isotope Laboratory and is the flagship of TRIUMF.

With the new ISOL installation, TRIUMF aims to produce rare radioisotopes. The ISOL@MYRRHA design will resemble that of ARIEL. “Except for the target assembly design,” emphasises Lucia Popescu. “In MYRRHA, the proton beam is directed on the target with an energy level of 100 MeV, while the ARIEL proton beam is only 500 MeV. This results in very different challenges. Once the radioisotopes have evaporated, the effect is the same.” The cooperation agreement was signed in 2019 by Eric van Walle, Director General of SCK CEN, and Jonathan Bagger, director of TRIUMF.

In 2019, the “oven” was tested for the first time by heating it electrically. The target temperature was reached, the vacuum was maintained and cooling took place without any problems. Next year, our scientists will check whether it is possible to guarantee a uniform temperature profile. They are also analysing how the material in the target container reacts under extreme conditions. “High temperatures, thermal shocks, a vacuum environment… All these factors are likely to affect the integrity of the material. For example, the material may melt, clogging up the porosity and trapping the radioisotopes in the disks. Or cracks may develop in the target container, in which radioisotopes could be lost. We are looking forward to completing construction,” concludes Popescu.

The particle accelerator is under construction at the Centre de Ressources Cyclotron (CRC) in Louvain-la- Neuve. The configuration at Louvain-la-Neuve is limited to 5.9 MeV. This low-energy part – the injector – is extremely important for the behaviour of the proton beam during acceleration. In fact, the injector determines the reliability of the accelerator. For this reason, SCK CEN pays great attention to conducting detailed tests of it.


“All the parts were tested individually. In March 2019, it was time for the next phase, which involved getting all the components working simultaneously,” says physicist and particle accelerator specialist Dirk Vandeplassche. This phase rapidly proved successful, as the first protons came out of the ion source without any problems. Vandeplassche explains that “the ion source provides protons that continuously increase in energy. First, in the radio frequency quadrupole (RFQ) and then through a series of magnets and cavities. This acceleration requires a certain amount of power. This power is supplied by powerful amplifiers. Our amplifiers were designed and built by the Belgian company IBA.” The scientists have analysed the first protons and prepared for them to be injected into the RFQ. Proton beam injection is scheduled for 2020. 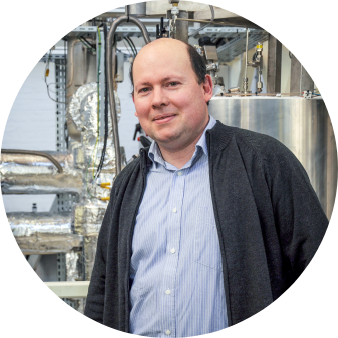 Scientific progress is the driving force behind technological development. Technological development in turn creates new research opportunities and thus stimulates science. Both aspects cannot interact as communicating vessels without researchers acting as a connecting factor. Researchers from different disciplines joining forces. A working environment where they can exchange their ideas is at the heart of it. We therefore try to safeguard our interdisciplinary environment in order to achieve our ambitious objectives.